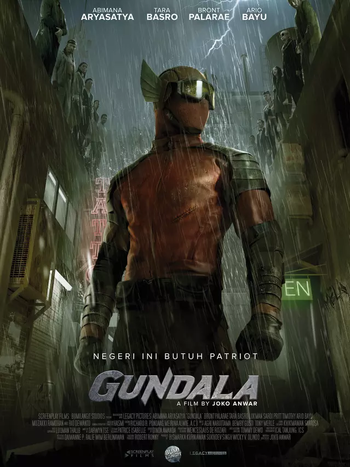 This country needs patriots.
"If we don't act against the injustices happening right before our eyes, then we're no longer human beings."

Sancaka has a curse: lightning always seems to find him, which made him afraid to go out in the rain. Born into a very poor family, he spent his childhood on the streets after his father was killed during a protest, causing his mother to leave to seek better employment to provide for him. When she did not return, Sancaka took it upon himself to find his own livelihood, which, in the city he was in, meant begging and taking on odd jobs as a child laborer. He was bullied quite often until he met Awang, an older street kid who taught him how to fight and defend himself. After Awang left, Sancaka continued working in the city, now with his fighting skills to protect himself and Awang's last words to guide him; look out for yourself and do not get needlessly involved in other people's affairs.

Growing up, Sancaka kept those words in mind while also researching his weird luck with lightning. He became a security guard for a printing workshop and lived a solitary life, seemingly apathetic to the plight of the people around him, until, one day, he decided to rescue Wulan, his neighbour, from thugs who were shaking her down for protection money. This set into motion events that will suck him into the city's grave social and political intrigue that would transform him from an unassuming security guard into the superhero Gundala, son of thunder.

Gundala is notable for being Indonesia's first big budget superhero movie based on an Indonesian comic series of the same name. Being directed by Joko Anwar, it is also notable for its biting social and political commentary, which actually serves as the core of the movie as a whole.

The film was also shown stateside in the Toronto Film Festival.