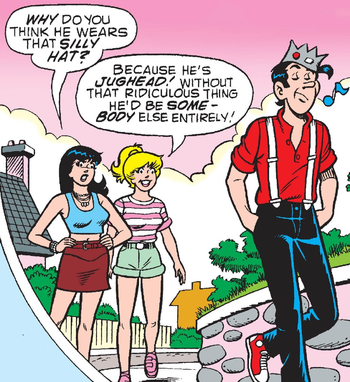 "You ever see me without this stupid hat on? That's weird."
— Jughead Jones, Riverdale
Advertisement:

"Clothes make the man" is a well-established idiom, but we all know it's specifically the head gear that makes you who you are.

It's also an easy way for creators who are prone to Only Six Faces to give a little bit more distinction to their characters, similar to how World of Technicolor Hair is used to give characters their own special flair through unique hair colors.

A subtrope of Distinctive Appearances and Meaningful Appearance. Compare to Artsy Beret, Cool Crown, Hat of Authority, Hat of Power and other headgear related tropes that creators use for characterization and/or distinction purposes.

Related to Iconic Item, for character-defining items or props well recognized outside of a work. Also related to Helmets Are Hardly Heroic, where the protagonist lacks headgear to highlight their specialness and make them easier to recognize.

See also Never Bareheaded, where a character is never seen without their hat, and Important Hair Accessory, which is when removing or putting on the headgear defines a moment of Character Development.