Lady in a Power Suit 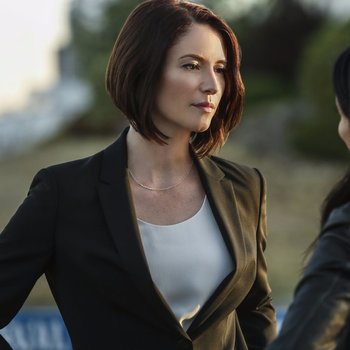 "This is my crime scene, detective."
Pam: You know, I think there could be a lot of benefits if you could learn to get along with women.
Dwight: Look, I have no problem with women. It's businesswomen and their, their power suits and their shoulder pads. Don't lie about your shoulders!
— The Office (US)
Advertisement:

Many important people wear suits and, unremarkably, some of them are women. They are cool, calm, and certain. Unflappable in business and lunch meetings, they will not take any man's Trash Talk. This woman is a badass just from the aura she presents, this aura radiating from her power suit. Of course, it isn't the suit that gives her power but it sure doesn't harm the image she's trying to project that she is not to be messed with. On a man's chess board, she's captured the king.

This trope is for the powerful women demonstrating their prowess through an equally powerful suit. Bonus points if their sheer presence intimidates men of a similar position. Frequently worn by the High-Powered Career Woman.

Note that with the outdated image of actual '80s "power suits" — unflattering bulky tweed things with massive shoulder pads — the power suit referred to here will be a much more slim-lined, definitely fitted and quite modern pantsuit, maybe even erring on the side of the traditionally masculine. Whilst characters in the shoulder-padded suits could be examples, it is dependant on how the work presents it: as these were typical office attire for any and all women of the period, to qualify it would require the distinctly powerful woman to be wearing a power suit and for no other woman in the work to wear one.

Compare Power Hair, likely to be paired with this.

See also Badass in a Nice Suit (which this woman could be), about kicking ass in an awesome suit.

Not to Be Confused with Samus Is a Girl, in case you're thinking of a lady wearing a literal "power" suit.