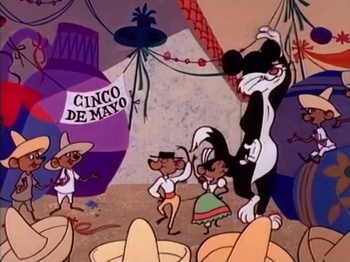 Thufferin' thuccotash, look at the size of that mouse!
Advertisement:

"Cats and Bruises" was a 1965 Merrie Melodies cartoon directed by Friz Freleng and an uncredited Hawley Pratt.

The Cinco de Mayo festival is in full swing in one of the town squares. Among the dancing and partying mice is, of course, Speedy Gonzales. Sylvester the cat decides to crash the party by donning some mouse ears (making him appear to be a giant mouse), but the fun is short-lived as Speedy figures him out almost immediately.

Between a chase into a dog pound, a butterfly net, an inflatable raft, a makeshift catapult, and a hot rod (which he forgot to put brakes on), things go as well as they usually do for the poossy gato.

While he would appear in two more cartoons, it is notable for being the final classic-era cartoon in which Sylvester has a speaking part.