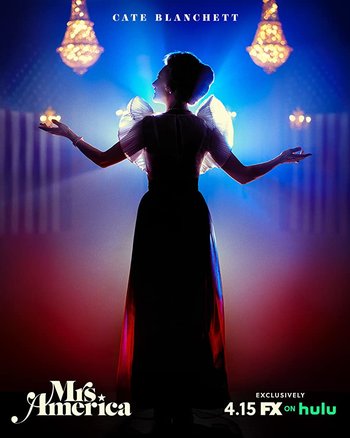 "They say that women are like tea bags; you don't know their strength until they get into hot water."
— Phyllis Schlafly
Advertisement:

Mrs. America is a 2020 mini-series developed by FX that aired on sister streaming service Hulu. The series revolves around the 1970s fight to ratify the Equal Rights Amendment that eventually came up three states short of ratification note In January 2020, Virginia became the last state but the question on whether or not the original 1982 deadline can be extended or if states who've rescinded can legally do so is being fought out in court because of the work by a woman named Phyllis Schlafly

. Cate Blanchett stars as Schlafly and the show is created and developed by Canadian writer Dahvi Waller.

The series starts in 1971 and the aftermath of the 1970 midterms when the Republican Party is in its weakest Congressional position since the height of the Great Depression. Schlafly gets brought in to help the party reorganize. A defense expert by trade, Schlafly gets embroiled in the fight against the ERA when she decides to run for Congress again. The party wants to give some sort of concession to the feminist movement (the ERA was officially introduced that same year) but Schlafly makes it her life's mission to stop it. The rest is history.

The rest of the main cast is rounded out by Rose Byrne as ERA proponent/feminist activist Gloria Steinem, Uzo Aduba as Representative Shirley Chisholm (the first black woman ever elected to Congress), and Elizabeth Banks as Republican ERA supporter Jill Ruckelshaus.