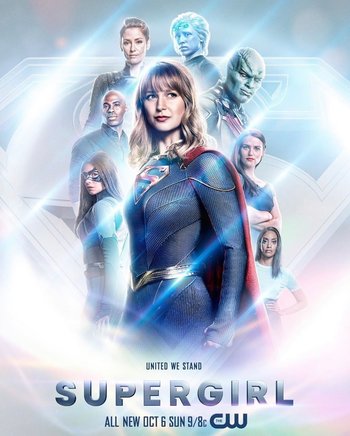 Supergirl is a television series based on the DC Comics character of the same name. Originally aired on CBS, it has been airing on sister network The CW, where it forms a part of the Arrowverse.

Inspired by the success of the Arrowverse, CBS optioned a series based on the cousin of Superman, a surprising move given an embargo on all Superman-related elements by those behind the DC Extended Universe, one that would eventually began to be lifted over time. Developed by Greg Berlanti, Ali Adler and Andrew Kreisberg, the series cast Melissa Benoist (fresh from Glee) as Supergirl. The show premiered on October 26, 2015, though the pilot leaked months earlier in May.

The series focuses on Kara Zor-El, a Kryptonian who escaped from her dying planet as a teen, sent after her infant cousin Kal-El to take care of him. However, her ship was knocked off-course into The Phantom Zone, where Time Stands Still, and by the time she made it to Earth, Kal-El was already a famous superhero, operating under the moniker "Superman" and the civilian name Clark Kent. Kal-El sent Kara to live with the Danvers family and grew to adulthood alongside their daughter Alex (Chyler Leigh). Twelve years after coming to Earth, Kara decides to use her powers to become a hero like her cousin.

Other characters include Cat Grant (Calista Flockhart), the head of media conglomerate CatCo, whom Kara works for in her civilian guise; James Olsen (Mehcad Brooks), an art director for CatCo; Winn Schott (Jeremy Jordan), a programmer for CatCo and Kara's neighbor; and J'onn J'onzz (David Harewood), a benevolent Martian and director of the Department of Extra-Normal Operations, a secret government agency where Alex also works. Main characters introduced in the following seasons include Mon-El (Chris Wood), a Daxamite prince who crash-lands on Earth and develops a romance with Kara; Lena Luthor (Katie McGrath), CEO of L-Corp and half-sister of Lex Luthor; Querl Dox (Jesse Rath), a Coluan and member of The Legion of Super-Heroes who eventually joins the D.E.O. as a strategist; and Nia Nal (Nicole Maines), a CatCo reporter who assists the Superfriends after discovering her prophetic powers.

Originally conceived as separate from the Arrowverse, the two realities were confirmed as existing concurrently within a shared multiverse, and Grant Gustin guest-starred as the Flash on an episode of Supergirl. The first season was a ratings success, however the series moved to The CW for its second season, following budgetary issues pertaining to filming in Los Angeles; the series was filmed in Vancouver from then on. After the Channel Hop, the show's setting was designated as Earth-38, as a Mythology Gag about the year Superman was created. The series has been participating in the franchise's annual crossover event since 2016, first as a Red Skies Crossover (Invasion!) and then as a full-fledged Crisis Crossover from the third season onward (Crisis on Earth-X, Elseworlds, and Crisis on Infinite Earths). This Earth was destroyed then merged with Earth-1 and what the Arrowverse Wiki dubbed Earth-BL into an "Earth-Prime" in Crisis on Infinite Earths, meaning the series is now a part of the Arrowverse proper.

In 2019, it was announced that a spin-off focusing on the lives of Superman and his wife, Lois Lane, is in the works. Tyler Hoechlin and Elizabeth Tulloch are set to return as Superman and Lois, respectively. Titled Superman and Lois, it was picked to order on January 14, 2020 and will premiere the same year.

"Earth doesn't just have one hero... now it has me. Now it has Supergirl."