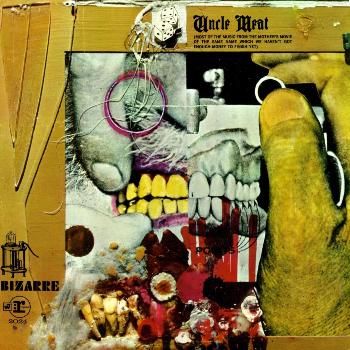 Uncle Meat is a 1969 double album released by Frank Zappa and the Mothers of Invention. It's generally considered to be one of his masterpieces and is most remembered for the fan favorites "Uncle Meat: Main Title Theme", "Dog Breath, in the Year of the Plague", "A Pound for a Brown on the Bus", "Mr. Green Genes", "Cruisin' for Burgers" and "King Kong".

Zappa originally intended Uncle Meat to be the Cult Soundtrack for a film "for which we haven't got enough money to make yet", as announced on the album cover. He did include the script, The Story of Uncle Meat, in the album liner notes but was never able to financially secure a movie adaptation. Instead he released a home video in 1987 called Uncle Meat, which was only available through mail order from his own company. This film had nothing whatsoever to do with the script of Zappa's album and is basically him and some friends clowning around in front of the camera, intercut with far more interesting footage from the legendary 1968 concert at the Royal Albert Hall (where the track "Louie Louie (at the Royal Albert Hall in London)" was performed). The scenes with Don Preston turning into a monster while Phyllis Altenhaus gets aroused by him and eventually eat hamburgers under the shower were filmed in 1971. The footage where Zappa interplays with Massimo Bassoli was recorded in 1987.

The dialogues from the 1987 Uncle Meat movie would later be added as Bonus Material on the CD re-release of the Uncle Meat album and are generally considered to be Album Filler (to the point where fans dubbed them "penalty tracks"). These bonus tracks would remain standard on all CD releases until the 2016 Meat Light entry in the Project/Object series of "audio documentaries," the first disc of which contained the original 1969 tracklist on CD for the first time. Most of the 1968 Royal Albert Hall concert performance would eventually be released on CD in 1993 as Ahead of Their Time.