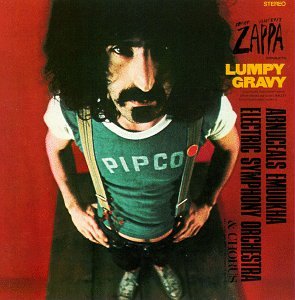 An extension of The Big Note.
Advertisement:

Lumpy Gravy is a 1968 music album by Frank Zappa. It was his personal debut album as a solo artist, recorded as a Solo Side Project without involvement of the Mothers of Invention as a group. His next solo album would be Hot Rats (1969), after which all of Zappa's releases, with or without the Mothers of Invention mentioned on the album cover, would be branded as his own work. Nowadays distinctions between his solo work and his work with the Mothers are no longer made: it's all part of the same canon and back catalogue. Lumpy Gravy was recorded for Capitol Records, while Zappa's work with the Mothers was released by Verve Records at the time. Verve's corporate parent MGM Records sued Capitol claiming that Zappa was not allowed to record for them because he was signed to Verve Records, even though his contract stated that he was allowed to work on outside projects in which he did not perform, and all of the music on the album was performed by an orchestra. As a result the album was delayed from release for over a year. However, this Executive Meddling didn't turn out too badly, because Zappa ended up reediting the original album into a longer and more avant-garde album released by Verve in 1968, containing dadaist improvised spoken word pieces and orchestral compositions, turning it into one of Zappa's most acclaimed albums. He himself once named it his personal favorite.

Lumpy Gravy was a New Sound Album compared to Zappa's previous output. It doesn't feature any songs and is a more a collage of orchestral compositions and manipulated tape sounds, intercut with sudden noises like snorks, coughs and surreal quotes and conversations. Zappa had all kinds of people from his entourage stick their heads inside a Steinway grand piano and would record their conversations from within. All dialogue was improvised, but he suggested general thematic guidelines. Interestingly enough for a solo album Zappa himself is never heard on this album. Most of the guest spots are members of the Mothers of Invention, studio staff members or people from Zappa's entourage or friends. One of the most unforgettable voices is Louis Cuneo, a man who visited the Mothers' concerts in the Garrick Theater often and was known for his Signature Laugh. Zappa would often invite him onstage, give him a stool to sit on, hand him a microphone and stop the music, just to let him laugh at nothing for five minutes, while the audience would laugh along with him.

Lumpy Gravy is also a Concept Album build around a vague and surreal storyline where people hide inside a piano, because of horrible pigs, ponies, and kangaroos who terrorize the outside world. It featured the first appearances of compositions like "Oh No", "King Kong" and "Take Your Clothes Off When You Dance" (here entitled simply "Take Your Clothes Off"). Conceptually, the album is the second part of a trilogy, with We're Only in It for the Money being the first part (despite being released later) and Civilization Phaze III being the final part. The links to Money are somewhat tenuous and mostly consist of shared melodic elements, but Civilization is essentially a direct sequel to the album, even sharing several dialogue parts.

The way I see it, Barry, this should be some very dynamite tropes