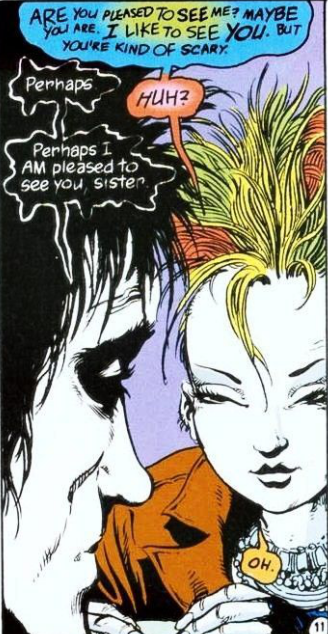 Delirium and Dream, talking.
"So Deadpool speaks with a yellow outline around his speech balloons? What exactly is that supposed to sound like? I can just imagine a movie studio trying to cast someone for the role of Deadpool: Must be able to speak English clearly with yellow outline around dialogue. Red outline voices need not apply!"
— Marvel Year in Review 1993note According to Cable, Deadpool has a "gravelly, Demi Moore-like voice" which the coloring of the bubble is meant to represent; also, as the coloring switched to digital, Deadpool's speech bubbles switched to entirely light yellow, although with the same effect. Also,someone eventually did get cast as Deadpool in a movie.
Advertisement:

At their most basic, Speech Bubbles are floating text circles (or other shapes) that characters in Comic Books and Web Comics or other dimensionally-challenged media use to communicate.

But Speech Bubbles aren't only generic circles or places to put words; they're metafictional constructs that can be painted, shaped, and written different ways! Superimposed, they can indicate an interruption, and different characters can be given different shapes or colors of bubble, making keeping track of who is speaking easier, as well as how they're feeling. Some villains and monsters like to use black speech balloons and strange colored text, and mechanical voices sometimes get rectangular "bubbles". If any character needs a subtly menacing tone to their speech, then it can be rendered in a black speech balloon with either white or red text (the latter maybe implying more anger). Also, madness can be indicated with mangled text, and foreign languages or accents with exotic fonts.

See Rebus Bubble for when a Speech Bubble contains only symbols used like a rebus puzzle rather than words.