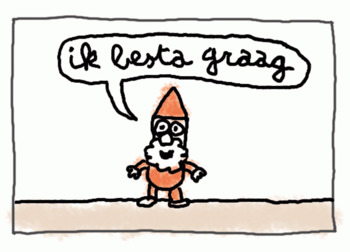 Kabouter Wesley (“Gnome Wesley”) is a Belgian series of short comics written and drawn by Jonas Geirnaert, first published from 2008 to 2010 in Belgian magazine Humo. From fall 2009 onwards, the comics were adapted as cartoon shorts on television for Man bijt hond.

The series revolves around “Kabouter Wesley”, the titular grumpy gnome. It has a very simplistic and surreal style, and often portrays violent and obscene material.

Geirnaert created Wesley while working on his short film Flatlife, to let off some steam, which explains the silly stories with a simple art style. Wesley is voiced in the series by Jonas himself, while the supporting cast is voiced by Jelle De Beule.