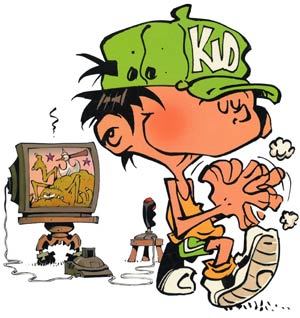 Kid Paddle is a Franco-Belgian comic by Midam (Michel Ledent) about ten-year-old fan of Video Games, films and general two-dimensional violence, the titular character Kid Paddle. Most of the one-page gags focus on the natural hostility between Kid and his Dad, Kid and his sister Carole, Kid and his Sadist Teacher, Kid and the grumpy arcade owner or Kid and the game he's playing at the moment.

It got a spinoff named Game Over focusing on The Many Deaths of You starring the Little Barbarian, the much-abused protagonist of Kid's games.

It also got a Belgian-French-Canadian animated series produced by now-defunct Quebec animation studio Spectra Animation (Fred's Head, Toopy and Binoo), which aired on Teletoon for 2 seasons and 52 episodes from 2003 to 2006.

The Little Barbarian sequences and Game Over provide examples of: