You Wouldn't Hit a Guy with Glasses? 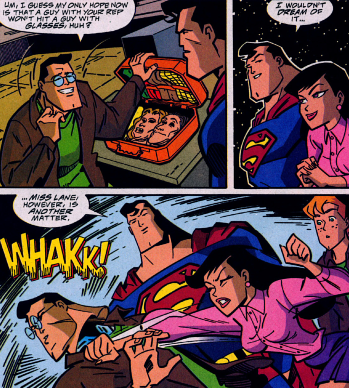 A common Stock Phrase, and a Tempting Fate trope: whenever any fictional character tries to invoke this, the odds are pretty good that he's about to get hit. The usual reaction is the attacker will immediately pull the glasses off, and then sock his opponent, but other variations are not unheard of.

The origins of this trope probably has roots in two things from Western culture: first, there was a time when wearing glasses was considered to be a sign of enfeeblement, as the only people who would need glasses were old folks, people with truly severe sight disabilities, and people that read too many books. (It was assumed that the last group would not care too much about "manly" sports or training.) As a result, hitting a man with glasses was picking on somebody who was obviously weaker than the person doing the hitting. This has become a Discredited Trope, as the advancements in mass production of eyeglass lenses and correctly diagnosing milder vision correction needs have resulted in far more people wearing glasses than in decades past. On top of that, the fact that most people are far more likely to have to read than they did even at the start of the 20th century, the increase of screen time with televisions, computers, and even smart phones, has made the use of glasses more frequent among both the general population and in fiction.

The second root for this trope likely is that until about the 1980s or so lenses were mostly made of glass, so hitting someone while they had their glasses on could result in that "obviously weaker person" discussed above getting broken glass to the face (and specifically the eye) as a result, and thus was seen as a detestable thing to do. Anyone worried about that will be glad to hear that technology has marched on. Currently the lenses of virtually all glasses are made of one form of plastic or another, and due to the properties of the plastics used to make lenses, the lenses of modern glasses are nearly shatterproof. In fact, in order to get glass lenses made someone needs to specifically request them, (and be prepared to wait weeks or longer while the lenses are made) or have vision issues that make them unable to adequately use the plastic lenses.

For anyone with poor eyesight, Hold My Glasses is still a good idea prior to a fight, because while the lenses may not shatter, the frames that hold the lenses are not the most durable of objects, and no one wants to be stuck in a Blind Without 'Em situation. Then again, some characters you might not want to challenge when The Glasses Come Off.

Compare Wouldn't Hit a Girl, Wouldn't Hurt a Child, and Would Not Shoot a Civilian for similarly other people that it is generally deemed bad form to harm.