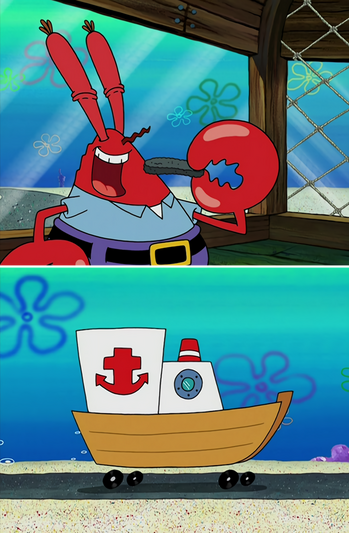 Someone is either doing something obviously dangerous, suggesting a cunning plan that can't possibly go wrong, or has just found out what it is he's eating. Cut directly to an ambulance flying down the street, sirens blaring. A variation of this for the "cunning plan that can't possibly go wrong" would be a Gilligan Cut to the character trying to explain his actions to the cops as they're stuffed into a police car and read their Miranda Rights. Another variation can be used involving the fire department coming to put out a fire the character caused (whether or not the character gets injured from it is entirely up to the writer).

Much like a Description Cut or Gilligan Cut, the actual injuries are generally left to the viewers' imaginations, but occasionally you will actually see the character falling victim to Amusing Injuries first.

If the character is The Klutz, sometimes the action being undertaken is apparently utterly harmless, and the humour comes from wondering how anyone could screw it up so badly that they require emergency medical attention.

Can also be Played for Drama, but usually without the Smash Cut associated with the comic usage. Related to Gory Discretion Shot. Compare Hospital Gurney Scene.