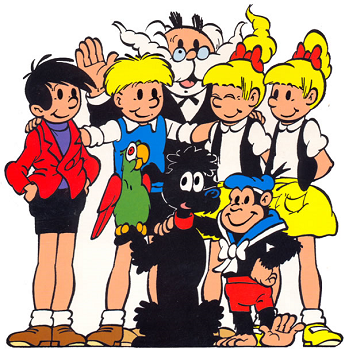 Jommeke and his friends
Advertisement:

Jommeke is a long-running (since 1955) Flemish comic book series, originally drawn by Jef Nys, but after his death in 2009, it was continued by other artists. Along with Suske en Wiske, Nero, Piet Pienter en Bert Bibber and De Kiekeboes, Jommeke is one of the most famous and popular comic strips in Flanders.

The series tells the adventures of a 10- or 11-year-old boy, Jommeke, and his talkative parrot, Flip. The rest of the cast consists of the playful Filiberke, twin sisters Annemieke and Rozemieke and Absent-Minded Professor Gobelijn.

The stories are exclusively for children and an institution in Flanders, but virtually unknown over the borders.

Some of the many tropes in Jommeke: