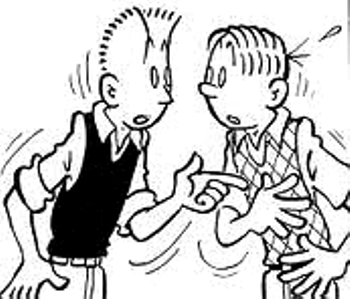 Piet Pienter en Bert Bibber was a Belgian/Flemish comic book series drawn by Jozef Van Hove (1919-2014) under the pseudonym "Pom". It ran from 1950 until 1995 and featured the adventures of two good friends, Piet Pienter and Bert Bibber.

Piet is the clever one, as his name indicates (pienter is a Dutch synonym for being smart). He often smokes a pipe and is generally a normal human being. Bert is the Anti-Hero. He is clumsy, naïve, impulsive, not very bright, frequently overestimates his own powers and often bad-tempered when his luck runs out. When danger is about he has a tendency to be easily frightened, thus his name (bibber means shiver in Dutch). But in general he has a good heart and sometimes shows moments of pure genius, courage and craftiness. Other important main characters are: