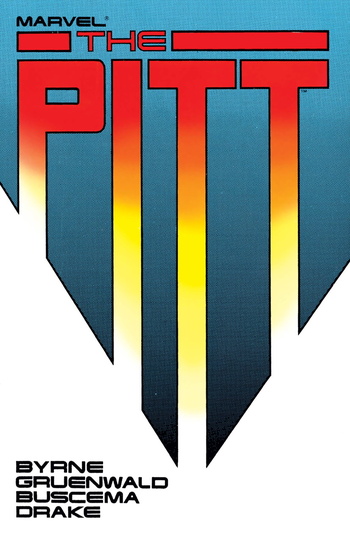 "Pittsburgh is gone. Completely. This fact must be understood absolutely. The city was within a sphere of earth and atmosphere measuring fifty miles in diameter which was completely converted into the strange, inert material now at the bottom of the crater — the Pitt, as I've heard it ghoulishly referred to."
—MacIntyre Browning
Advertisement:

The Pitt is a 1988 one-shot comic book published by the New Universe imprint of Marvel Comics. It's co-written by John Byrne and Mark Gruenwald, and illustrated by Sal Buscema and Stan Drake. Color art is by Janet Jackson.

Set in shared superhero setting The New Universe, it explores the consequences of a Wham Episode story in another New Universe comic, Star Brand, showing the total destruction of Pittsburgh, Pennsylvania and the first twelve hours of the aftermath.

The New Universe was unrelated to the existing Marvel Universe and initially billed as “the world outside your window”, only diverging from the real world when a single Mass Empowering Event granted some people superpowers. The Pitt and its associated Star Brand story marked a new approach to the line, triggering changes in the other New Universe titles and starting a chain of events that continued to send the shared world in a darker direction.

The story of The Pitt is told via three different protagonists.

It was released December 8, 1987, using a double-length 'prestige format' unlike any of the other New Universe books.

The same prestige format approach was later used for another one-off special with an impact on the whole line, The Draft, and again for the grand finale of the New Universe, a miniseries entitled The War.

The comic has no connection to Dale Keown's Image Comics series Pitt, the Judge Dredd storyline, the Dirk Pitt Adventures or the expansion pack for Fallout 3.

The Pitt includes the following tropes: