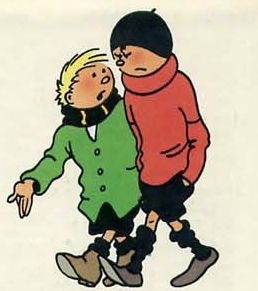 Quick and Flupke (Quick et Flupke) is a Belgian comic strip drawn and written by Hergé, best known as the creator of Tintin. It's his second best known comic book series, but never reached the same universal popularity Tintin did. After his death in 1983 it was terminated too, though there hadn't been any new episodes since the 1950s.

Quick & Flupke is a gag comic in which two little boys are the protagonists. Quick is the elder of the two and always wears a beret and a red sweater. Flupke is a bit smaller and always wears a green coat and a long scarf. They live in Brussels and like playing pranks on everybody, including their Arch-Enemy, police officer "Agent 15".

Tropes found in Quick and Flupke