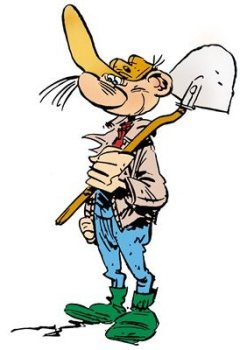 Just hope that when you pass away you'll have a grave digger as competent and wonderful as Pierre!
Advertisement:

Pierre Tombal is a Belgian comic book series by Marc Hardy and Raoul Cauvin. It's a gag comic about a gravedigger who acts like a confidence advisor towards the dead people in his cemetery. He treats them as residents and listens to their wishes, complaints and problems, yet also makes sure they obey the rules. Sometimes the dead forget that they are all living skeletons now and frighten the living people. Or they overestimate their abilities and do stuff that either leaves their bones in a mess or frightens everybody. One of the running gags is that some people are genuinely shocked by the fact that these skeletons are still alive, while others just accept the fact that life apparently just goes on, even after death.

The series is one of the Print Long-Runners, debuted in 1986 and still in syndication.

Tropes found in this comic strip: