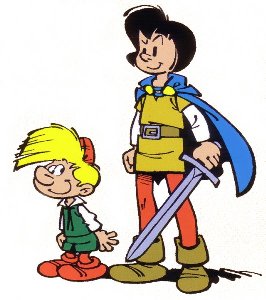 Johan and Peewit (Johan et Pirlouit in French) is a Belgian comic book created in 1952 by Pierre Culliford a.k.a. Peyo. It was originally a reworking of a short-lived newspaper strip.

Openly inspired by Hollywood classic chivalry movies and comic books such as Prince Valiant, it's the humorous stories of a young page and his dwarf friend in a undefined European medieval country with touches of magic. This series is remembered for introducing to the world certain blue skinned miniature humanoids, which would overshadow it.

The last 4 albums have been published after Peyo's demise, one of them signed by his son Thierry Culliford and two others by Yvan Delporte, to whom we owe the best Smurfs stories.

Johan and Peewit provides examples of: