All Are Equal in Death 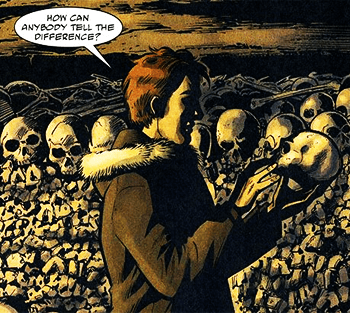 "Who was the fool, who the wise man,
who the beggar or the emperor?
Whether rich or poor, all are equal in death."
— Anonymous, Vierzeiliger oberdeutscher Totentanz
Advertisement:

Statistics regarding life expectancy tell people - We all die someday, and people say we will all be treated equally by and in it. It doesn't matter if you're a master or a slave, a sinner or a saint, man or woman, a bishop or knave, white or black—or how the deceased are treated by others around—you might still say everyone is all treated the same. Hence death is often called "The Great Leveler", for all and their distinctions be leveled. Either the funerals or the afterlife (if any) must be the same for everyone, whichever is used last in the work.

It's an old theme in medieval art with the Danse Macabre, which told the living that death comes to all and that all earthly glories are bound to vanish, but it can also take other expressions.

Note that this goes one step further than that everyone, in at least a given setting, is going to die—everyone must be treated the same as well. Even a statement that everybody is judged the same way implies a weakening of this trope. If everyone has the same funeral, but then go to different afterlives, then the trope is subverted. Put another way, this is An Aesop that all differences among people are erased upon death.

This is also one reason Balancing Death's Books is a viable option when Death comes to collect a soul: If everyone's equal, then there's no problem subbing one person for another.

See also Cessation of Existence, No Animosity in the Afterlife, and Only One Afterlife. Part of the reason why Death Means Humanity. Not to be confused with Together in Death. Contrast Species-Specific Afterlife for one situation where different types of people are treated quite differently after death. Contrast also Immortality and, in particular, Immortality Seeker.

Because this is a Death Trope, there will be spoilers ahead.