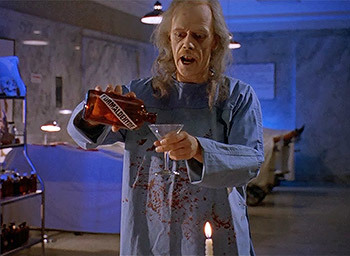 Formaldehyde? I wouldn't try that if I were you.
Sheldon: What do you wanna be when you grow up, Dante?
Dante: I'm not sure. I like working with people... But I like being alone, too...
Sheldon: How about being a mortician — best of both worlds.
Dante: Heeeey... Not bad.
— Sheldon Comic

Be they morticians, pathologists, funeral house workers or gravediggers — people who deal with the dead have always been assumed to be interesting, because, well, they deal with the dead. That is why in fiction, it is popular to present workers in those professions as either outright creepy, or at least have a way-off sense of humor. Especially if they don't look creepy (or aren't normally so), looking at something like this for the first time can creep any guy out. They play around with the bodies of the deceased, joke while performing scientific dissections, or at least die first during a zombie attack. They are also suspect for profiting from someone else's death; after all, such a person may seem a little too happy about the fact that, now that someone has died, the mortician is going to get paid for the funeral.

The trope can just be Played for Laughs as well as Played for Drama, with often a lot of overlap between the two. The more unsettling version lurks around the graveyard and has an unhealthy obsession with his deceased clients. When they're not in the graveyard, they can be found in rather eerie places, such as near newly deceased bodies or in coffins. Often they are the primary suspect whenever something particularly creepy happens. May turn out to be a Living Doll Collector, a Necrophile, or an outright evil Necromancer. Prone to spout ominous-in-context lines like "Be seeing you..."

If they accidentally encounter a living person instead of an expectedly dead one, it may be related to Waking Up at the Morgue or Buried Alive. Also see Black Comedy.

Compare with the Undertaker character in Westerns — some of whom fit here too, the tropes can overlap.