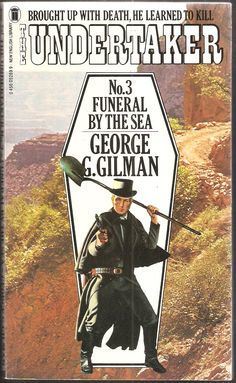 The Undertaker was the third series produced by prolific Western writer Terry Harknett under the pseudonym George G. Gilman. The central character, Barnaby Gold, a.k.a. The Undertaker, makes his first appearance in Black as Death (1980), when he kills the rancher who murdered his libidinous wife. In subsequent books, he finds himself hunted by relatives of the deceased, who constantly frustrate his plans to leave the United States for Europe. Gold appeared in six books altogether, and made a fleeting appearance in the final, ultra-rare Edge novel, The Rifle (1989).

As may be guessed from the series title, Gold was an undertaker before going on the run. One quirk that sets him apart from other gunslingers is that he insists on personally burying anyone he kills.

The books in The Undertaker series are:

Tropes in The Undertaker novels include: