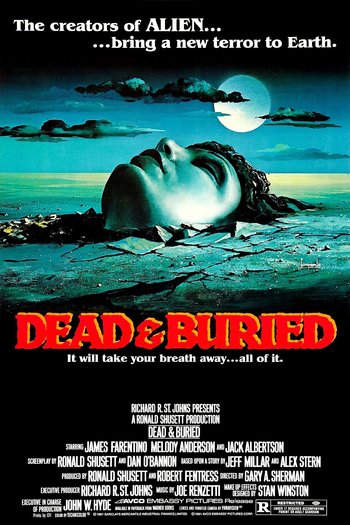 "You can try to kill me, Dan. But you can't. You can only make me dead."
Advertisement:

Dead & Buried is a 1981 horror film directed by Gary Sherman and written by Ronald Shusett and Dan O'Bannon (the writers of Alien).

Dan Gillis (James Farentino) is a detective in the small, sleepy, peaceful New England town of Potter's Bluff. One day, grisly mob killings start being committed against tourists passing through, only for the victims to then appear alive again living normal lives within the town. Dan investigates. Meanwhile, the town's mortician, William Dobbs (Jack Albertson), seems a little too happy about the killings... and Dan's wife, Janet (Melody Anderson), keeps disappearing at night.

The film has a reputation as one of the better, genuinely scary films on Britain's Video Nasties list (even Leonard Maltin praises it). It is also known for a twist ending that would give M. Night Shyamalan a run for his money.