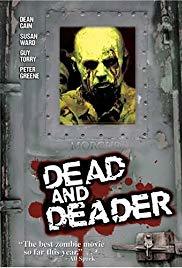 Lieutenant Bobby Quinn is an American soldier in the Middle East, reported seemingly dead after being bitten by a mysterious scorpion. However, he wakes up in a body bag, with a mysterious craving for raw meat. He then discovers that the base is being plagued by his former colleagues, who have gone full zombie. As he battles the living dead, Bobby discovers that other parties are seeking the zombie virus for their own purposes...

The film was distributed by Starz in Australia.