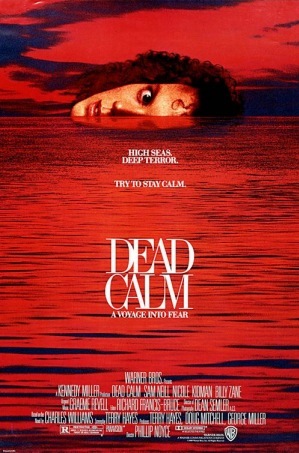 Dead Calm is a 1989 psychological thriller starring Sam Neill, Nicole Kidman and Billy Zane, based on a novel by Charles Williams.
Advertisement:

Reeling from their infant son's death in a car accident, Australian couple John (Neill) and Rae (Kidman) Ingram take a vacation in their yacht. Becalmed in the Pacific, they find a drifting boat that appears to be taking on water. A man, Hughie Warriner (Zane) rows out to them, claiming the crew died of food poisoning and the vessel is sinking. John, a Royal Australian Navy officer, is suspicious of Hughie's story and rows out to investigate the stricken boat while Hughie sleeps, but Hughie awakes before John can return and sails off, taking Rae hostage and leaving John stranded.