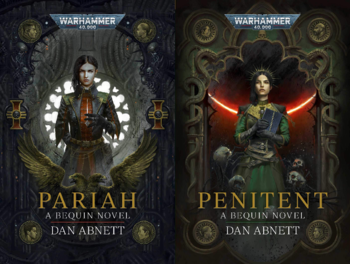 Bequin is a trilogy by Dan Abnett set in the Warhammer 40,000 universe, a sequel to both his Eisenhorn and Ravenor series.
Advertisement:

The protagonist and narrator of the series is Alizabeth "Beta" Bequin, a pariah trained to be an agent of the Inquisition. When the organization that raised her is attacked and destroyed, she finds herself pursued by multiple competing factions for reasons she doesn't know, and in the process uncovers revelations with consequences for the entire Imperium of Man.