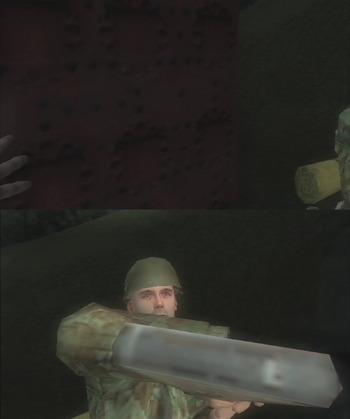 KRAUTS!!!
The heroes of a story are suddenly ambushed but are either knocked out with concussive force or shot with Tranquilizer Darts, Knockout Gas, Stun Guns or something with a similar effect, and not lethal weapons, because the ambushers want them alive.

Usually, the scene will involve the darts coming out of nowhere before those being shot at even see their attackers. The heroes are walking along, when all the sudden - zip!, Alice goes down. Followed by Bob and Charlie, and the screen fades out.

When this happens in video games the player's weapons and items are usually taken away. In some games there will be an opportunity for the player to get their items back shortly after the Knockout Ambush, in others the game might give different items to replace the ones lost.

Sub-Trope of I Want Them Alive. Often involves Instant Sedation.