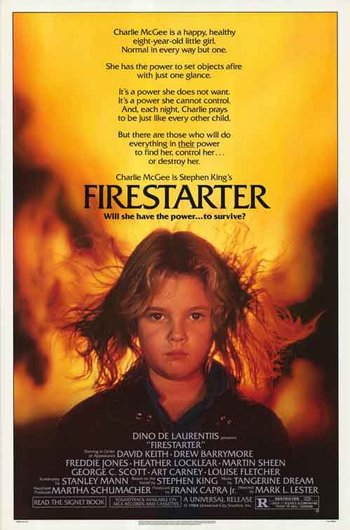 The original Katie Kaboom.
"It was a pleasure to burn."
—Epigraph (from Fahrenheit 451)
Advertisement:

Firestarter is a 1980 novel by Stephen King. It's about a 7-year-old girl named Charlene Roberta McGee (she goes by Charlie), who can start fires just by thinking about it, or if she's feeling particularly upset; she also has a hint of precognition and a fair amount of telekinesis. Her father, Andy, has a mental domination ability he calls the 'push', allowing him to enact powerful influence over people; and her mother, Vicky, has a very limited form of telekinesis, which only extends, on a good day, to closing doors and turning off the television from across the room.

They have those abilities because Andy and Vicky participated in an experiment sponsored by a government organization called the Department of Scientific Intelligence (nicknamed "The Shop," after A. E. van Vogt's "The Weapon Shops of Isher"

) during their college days; they were told that there was a 50% chance they would be injected with a small dose of harmless hallucinogenic drug and a 50% chance of being injected with water. It was actually an incredibly dangerous Psycho Serum, which gave them - and all the other participants in the test - paranormal abilities. Out of these other people, all but 3 are either dead or in a mental asylum of some sort. (The third one lost his abilities and is living a normal life.)

The agents of the Shop kept the McGees under surveillance, eventually killing Vicky and kidnapping Charlie. However, Andy freed her, using his 'mind domination' ability. At the beginning of the book, Charlie and her father are on the run from the Shop, whose members want to use Charlie's power to "influence" world leaders.

Also made into a movie of the same name in 1984, directed by Mark L. Lester and starring Drew Barrymore as Charlie, David Keith as Andy, George C. Scott as Rainbird, Martin Sheen as Hollister, and Heather Locklear as Vicky. This was the first of several Stephen King adaptations produced by the Dino De Laurentiis Company. A (contested) sequel series, Firestarter 2: Rekindled, aired on the Sci-Fi Channel in 2002. A second adaptation of the novel, by Blumhouse Productions and starring Ryan Kiera Armstrong as Charlie and Zac Efron as Andy, was released May 13, 2022 in theaters and on Peacock.