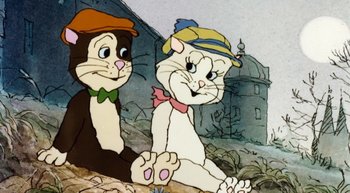 Pelle (left) and his love interest, Maja (right), from the 1981 animated film
Advertisement:

Peter-No-Tail (Swedish: Pelle Svanslös) is a series of children's books written by Gösta Knutsson, which have also been adapted to two animated movies, among other media. The books follow the titular character, an anthropomorphic cat, notable for not having a tail, living in the Swedish city of Uppsala, and his shenanigans. The main antagonist is yet another cat (just like pretty much all named characters in the series) named Måns, and his helpers Bill and Bull. They usually scheme for Pelle to embarrass himself in front of other characters, or just get him in some kind of trouble, but since this is a children's book series, it seldom goes well for them in the end.

Pelle has also appeared on TV and in movies. In The '80s, he starred in appeared in two animated films, Peter-No-Tail (1981) and its sequel Peter-No-Tail in America (1985), both of which were directed by Swedish animators Stig Lasseby and Jan Gissberg.

In 1997, a Julekalender TV series with the characters aired, this time with live actors in costumes and cat makeup. It retold many of the stories from the books, but changed up a number of details (including moving the time period of the events to December, with winter sports and Christmas preparations being constant recurring themes. This series got a sequel movie in 2000, named Pelle Svanslös och den stora skattjakten (Peter No-Tail and the Great Treasure Hunt).

, which was more a re-adaptation of the original stories.