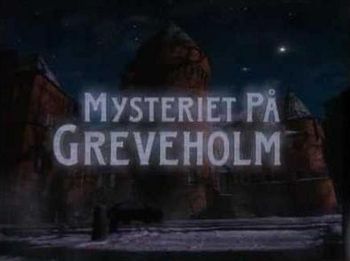 Mysteriet på Greveholm (The Mystery of Greveholm) is a Swedish julekalender that originally aired in 1996. The series blends mystery, science fiction, fantasy, drama, romance and comedy, and, as of 2014, remains an audience and critic favorite. It is notable for using what at the time was a significant amount of CGI.

It's winter, the first day of December. A paperboy is doing his daily business; passing out the morning paper. When he arrives at an old castle, a by-passing man tells him that nobody lives there. The paperboy replies that there must be someone there, as he throws a paper inside the walls every morning and the next day it's gone. The man shrugs and says that he's decided to move away from the neighbour hood as he's had enough of all those weird things happening over at the castle. The paperboy promptly throws in the paper anyway... and is shell shocked when it suddenly levitates above the ground and flies out of his sight.

Cut to the ditzy Olsson family living in their small apartment in the city. Because of a miscalculation, the satellite that is supposed to provide Swedish television is out of orbit, which causes major noise in TVs all over the country, and the one being blamed for it is none other than the dad of the family. Tired of being ridiculed by the newspapers, the family decides to rent a house outside the city and get away from all the gossip.

However, due to a misunderstanding, the family accidentally rents the old castle named Greveholm and starts preparing for the best Christmas ever. The three children immediately start noticing strange events and spooky figures lurking the dark corridors, and they decide to investigate. And soon enough, it's revealed that there are bigger, darker secrets hidden behind the thick brick walls; some of them much more dangerous than they could ever imagine...

Like with any huge successes, merchandise was made to ride on the waves of the show's popularity. No fewer than three PC games were produced by Young Genius. A tabletop game was also made.

Mysteriet på Greveholm has been re-aired several times as half-hour episodes consisting of three short episodes edited together. The original episodes can be purchased on DVD, or (as of 2021) watched legally for free on SVT's open archive

, provided you live in Sweden.

In December 2012, a sequel aired as that year's Christmas Calendar and revolved around a new family moving to castle. The production team was more or less the same as before, with Dan Zetraeus (scriptwriter) and Jesper Harrie (director and co-scriptwriter) joining forces once again. Almost everybody from the old cast returned to reprise their roles, with Jean, Staffan and Leif as part of the main cast.