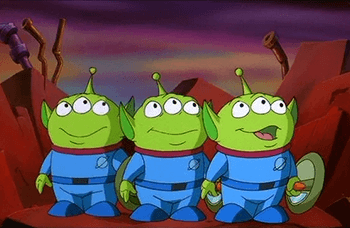 A formerly common depiction of aliens, now a Discredited Trope. They're green, they pilot Flying Saucers, and they're smaller than humans. The degree of "little" varies widely; they may be only a head or so shorter than humans, or they may be small enough to pick up in one hand. They commonly have antennae.

Typically, they are either hostile or mysterious. If hostile, they will wield ray guns, speak English, and will ask anyone they find to take them to their leader. If mysterious, they will probably not speak, or speak only in weird beeping noises, possibly abduct people, and then disappear quickly and mysteriously, leaving little trace.

Since the Mariner and Viking probes of The '60s, they've been slowly replaced by The Greys in serious works. Basically done for comedy now. Also qualifies as a Dead Unicorn Trope, since the humorous depictions have always outnumbered the serious ones.

What happens when a Little Green (wo)Man visits a doctor.

What happens when a Little Green (wo)Man visits a doctor.