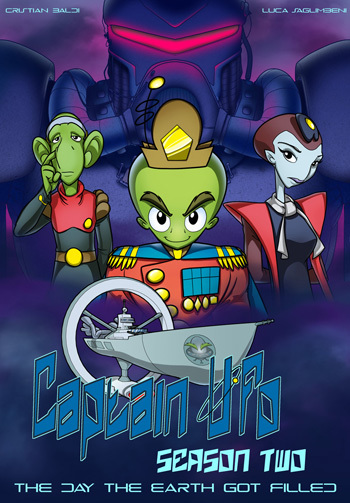 Season two cover. Ufo in the middle, Number One on the left, Celeste on the right, the season's big bad on the background, the Widowpunisher on the foreground.
Advertisement:

Created and illustrated by Cristian Baldi and written by Claudio Baratti (season one) and Luca Saglimbeni (season two, still ongoing), this webcomic follows the adventures of the titular Captain Ufo, a short, bombastic green alien who aspires to conquer the Galaxy and (usually) fails miserably, triggering big adventures. Accompanied by his trusted yet rather stupid First Mate, Number one, a quirky crew and (since season two) a verbose judge on a personal quest, a no-nonsense soldier as Chief of Security and a neurotic young doctor as Chief Medical Officer, the captain travels among the stars on his ship, the Widowpunisher.

It's not clear in which galaxy the stories take place; so far there has been no human characters, nor in the main cast, nor as a background character.

Each season is a complete, self contained story arc. Season one follows ufo's first attempts to form an empire; season two starts with Ufo and Number One convicted for the events of season one, and later, dragged into the adventure by the same judge who put them on trial, they find themselves unwillingly involved in a story of pirates capable of destroying etire planets, corrupt corporations and conspiracies. While remaining comedic (especially when the Captain or his original crew are around), season two is much more adventurous than season one, with occasional dramatic moments.

and, for English speaking readers, Tapastic

. Updates weekly, on tuesday (Italian) and wednesday (English). It began in June 2014; the current season is scheduled to end in July 2017 and there's at least a third season planned.