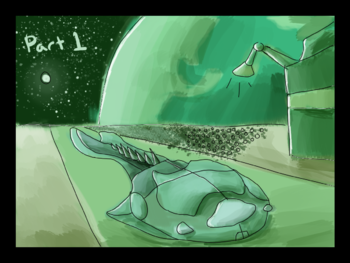 We are all pleased to announce the work on the Drepanaspis has been completed
Burgess Shale is a short-lived webcomic hosted on Scratch by user @Hawqua_of_Imber.

After her ship malfunctions and kills two government officials, Atrypta is sent to the ancient artificial planet of Imex. The people sent are tasked with salvaging whatever remains of the construction to build a Dyson sphere. Now, she must find a way off Imex before it dies in darkness.

The comic only lasted one episode of eleven pages. It can be read here: https://scratch.mit.edu/projects/313282350/