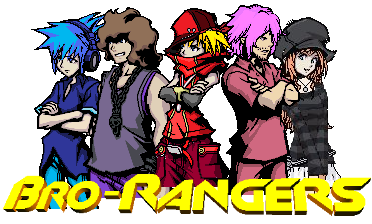 Bro-Rangers is a Sprite-based Webcomic inspired by what is known among the lucky participants as The Greatest MSN Conversation in History, and started in November 2009. Among various hiatuses, the comic is still running somewhat strongly today and can be read online at Neoseeker Forum's 'The World Ends With You' Board

as each issue is released, and archived later at TWEWY Fanverse Comics Archive

The story follows 5 People who awaken to a mysterious power and form the 'Bro-Rangers', a team of bro-some heroes that fight to defeat the evil Hoes and their leader, 'The Communist'. Well, that was the original concept. The comic's plot has spiralled and now includes a large cast of original characters, various plots and arcs, and takes the occasional stab or reference at an Anime or Video Game.

You can see the archives here

and check out the wiki, the Encybropedia, here.