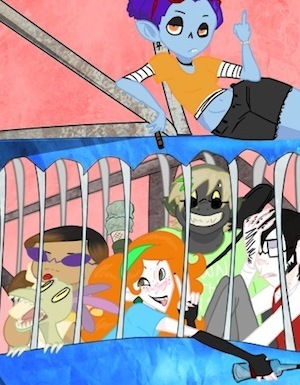 "It's got some vampires but we're pretty sure it's better than twilight...maybe."
Advertisement:

Bloody Urban is, to quote its creator, a completely normal slice-of-life webcomic, set in an Alternate Universe of Sydney, Australia populated by vampires, werewolves and other sorts of monsters.

A surreal parody of both the Supernatural Soap Opera and the typical Work Com, Bloody Urban follows the lives of Murray Manson and Shannon Arcuni, a couple of hipsters in their mid-twenties who work together in the creative department of what is possibly the world's strangest advertising company. Murray, a writer, is an awkward, slightly neurotic werewolf who is endlessly frustrated with his life. Shannon, an artist, is a gleefully insane, food-obsessed ghoul who is usually getting himself into some kind of trouble in the name of True Art. Along with their various friends and relations, they go about their lives doing things that usually precede hilarity.

Most of Bloody Urban's humour comes from the fact that, instead of the typical Masquerade setup, the general population is aware of every weird thing that exists in the comic's universe, they have always been aware of them, and they consider it all to be completely normal.

The series was mainly a gag-per-week webcomic. The comic, including some of the original hand-drawn strips can be found here

. The creator has since stopped making the comics in order to focus on producing a pilot for an animated series.