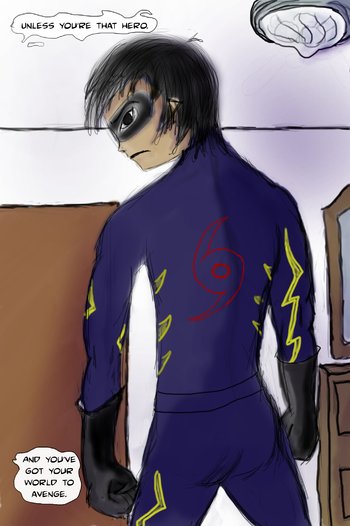 Becoming Hero is a mixed media webcomic, short story, and podcast platform about a comic book character who decides to kill his author. The title can also refer to the 2017 novel.

Asian-American teen Skye works in the superhero business mostly because he loves goofing around with his friends: his best friend, secretive Irish-American Mark; graceful, compassionate Arab-American heroine Butterfly; quirky and rough mixed-Asian Pink; brilliant and hyperactive African-American Thunder; and the intrepid, Superman-level-pure Puerto Rican leader, Robot-man. The mixed-media comic follows Skye and his friends through a number of off-beat adventures intended to build rapport with the characters prior to the release of the 2017 novel. Their story is a story within a story, so it also follows the decisions their author makes, and the way his life affects (and ruins) theirs.

The 2017 novel follows Skye and #blerd protagonist Jace, an avid comics fan who's not sure what's wrong with his roommate. Jace acts not only as the protagonist on a journey to discover his own heroism, but also as an avatar for the reader. According to the author's website, the novel was originally pitched as follows:

"Skye's an Asian-American comic book superhero with a gun in his hand and a gripe against his author. Every girl Skye’s ever dated is either dead or trying to take over the world, and in the series finale, Skye's best friend kills him. Or so he thinks. The weapon meant to disintegrate Skye lands him in his author’s universe. With a shot at revenge.

Skye, meet Jace. Jacen Howard's a brilliant black teen math whiz, but at his West Baltimore high school that's a bad thing. Black kids aren't 'supposed' to be good at math, and if the bullying isn't bad enough, Jace's cop-father regularly pisses off the local gang recruiters. Jace doesn't see himself as a hero; he's just trying to survive. He might be just the hero Skye needs.

But Skye won't open up when Jace tries to ease him out of PTSD, and the author's still torturing his friends. As Skye's mood swings and nightmares escalate, Jace realizes that if he doesn’t uncover his roommate's real identity soon, Skye will hurt someone–and Skye’s still deciding if murder will save his world, or damn his soul."

The comic can be found at http://becominghero.ninja/