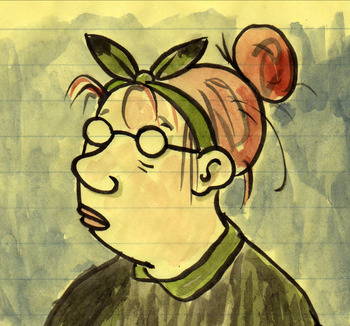 Lynda Barry is an American cartoonist of the Underground Comics and Alternative Comics movements. Active from the late 70's to The New '10s, Barry is one of the only notable women of Underground Comics. Most of her work was published as Ernie Pook’s Comeek (Pook rhyming with book), a serial in alternative weeklies, but have since been collected into books. Barry has essentially retired from cartooning and now works as a creative writing instructor; her most recent works are non-fiction about the creative process.

Barry's comics often draw from her life experiences growing up in a working-class, racially mixed neighborhood of Seattle. Barry's father was of Irish descent, her mother was of Filipino, and she had a difficult childhood raised primarily by her mother. Her comics contain themes on sex, relationships, childhood, loss of innocence, and fears, childhood or otherwise. Her earlier work was more episodic, focused on adult relationships. Over time her work became more serial, focusing on the semi-autobiographical adventures of a particular family: Maybonne, the rebellious teen sister, Marlys, the cheerful bookish younger sister, and Freddie, their emotionally disturbed cousin who visits from time to time, with cameos from other family members.

Barry is friends with Matt Groening, another underground cartoonist from the Pacific Northwest.

Tropes present in her comics