Everyone Is Christian at Christmas 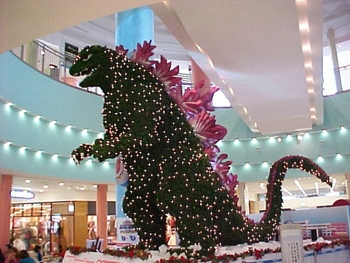 Once December rolls around, even Godzilla joins in the festivities!
Lisa: Hey, I thought Krusty was Jewish.
Bart: Christmas is a time when people of all religions come together to worship Jesus Christ.
— The Simpsons, "Marge Be Not Proud"
Advertisement:

It's Christmastime again, the biggest holiday in Christianity outside Easter (which one's bigger depends on where you live), and everyone has gathered around to celebrate all the holiday traditions, open some presents, and maybe go to church. Yes, we said everyone, including the people who aren't actually Christian, or even religious at all. Shows with characters who are conspicuously Jewish (or simply not Christian) the rest of the year, will usually either flat out ignore this fact during the required Christmas Episode, or skim over it in passing in a very token sort of way.

This could be justified in that many non-Christians socially celebrate Christmas with friends, despite having no ties to the holiday themselves. (Not to mention the fact that people were throwing pagan midwinter festivals for centuries before Christ's birth and the Church simply fixed the Nativity to that date because those pagan festivities were too popular to simply ignore or suppress.)

Conversely, shows that acknowledge there are other holidays people celebrate in the season may feature a Hanukkah Episode, or even combine the two.

Compare and contrast Do They Know It's Christmas Time?, in which the characters learn the True Meaning of Christmas (which may or not be the religious one, depending on the work) only for it to become a Forgotten Aesop in the next episode. Also contrast You Mean "Xmas", in which there's a non-Christian holiday that just so happens to correspond to Christmas, and Santa Clausmas, where Christmas is related to Christ In Name Only. See also Ambiguously Christian, where details of the character's faith are left unspecific, and Jesus Was Way Cool when people who aren't Christian still admire that guy Christians celebrate. No relation to Everyone Is Jesus in Purgatory.