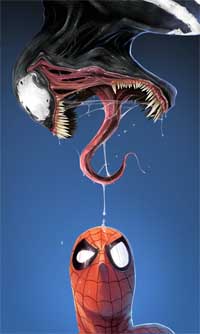 "Or else what, a monster's going to squirt goopy goo all over my face, huh, Ulrich?"
[splotch]
— Élisabeth "Sissi" Delmas, Code Lyoko, "End of Take"
Advertisement:

What is the first hint that a giant monster, yet unseen, is towering over some characters, or clinging to the ceiling above them?

Not the vibration of its moves, the sound of its breathing, the putrid smell or anything like that...

No, in most cases, the very first hint they'll ever get of this menacing presence is... some liquid splashing over their heads or shoulders.

Most often drool, though it can be other secretions. Sometimes this drool is acidic, and they're really in trouble. May be also the blood or remains of the monster's last victim for extra fun.

In a way, an organic form of *Click* Hello, typically followed immediately by Oh, Crap!.

See Rain of Blood if the dripping involves blood. Also see Phlegmings. If the characters are inside a Cave Mouth, they may realize in horror that this is the cause of that drippy sensation.

Can overlap with Perverted Drooling, if The Peeping Tom is Ceiling Clinging. Compare Dripping Disturbance.