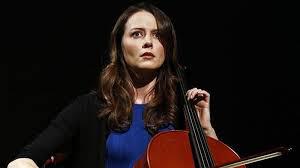 Things get personal for Agent Coulson, who must race against time to save his former girlfriend, the cello-playing Audrey Nathan (Amy Acker).