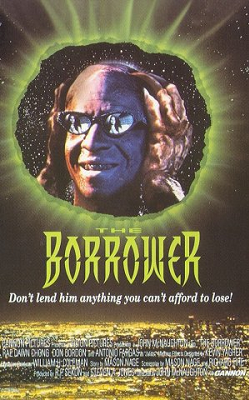 The Borrower is a 1991 Sci-Fi Horror movie by The Cannon Group.

An alien murderer who is sent to Earth by its brethren as punishment and proceeds to steal human heads when its old ones wear out.

Not to be confused with The Borrowers (1997) or the books the latter film is loosely based on, about a Wainscot Society of miniature humanoids.