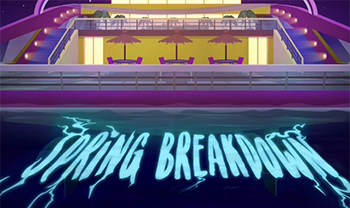 channel instead of the Hasbro channel.

It's Spring Break, and the Rainbooms are about to board the most glorious yacht ever for a relaxing cruise. But Rainbow Dash is convinced that Equestrian Magic is on the loose and won't let anyone rest until she finds it! This leads to disaster on the high seas, a trip to Ponyville, and the ultimate discovery that Equestrian Magic related to the Storm King has seeped into their world and is threatening everyone on board the yacht!

The online version can be found below:

The Equestria Girls perform a rap song about enjoying a luxury cruise during spring break.

The Equestria Girls perform a rap song about enjoying a luxury cruise during spring break.