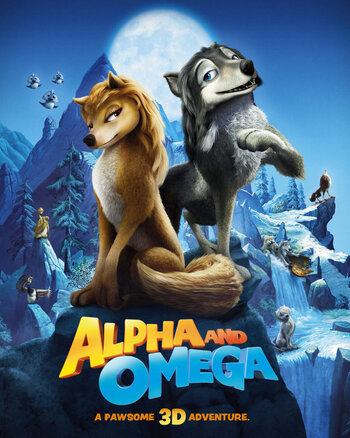 A computer-animated film released by Lionsgate and produced by Richard Rich and Crest Animation, in Fall 2010.

Alpha And Omega focuses on two wolves on opposite ends of their pack's social order. Kate is an Alpha, who takes her job seriously, and Humphrey is an Omega, who spends his days joking around with his friends. Kate is to be married to Garth, an Alpha wolf from another pack - not for love, but to preserve peace. However, the marriage is put on hold when Kate and Humphrey are sedated and taken a thousand miles away from home, to... repopulate. They must work together to get back home, but falling in love with each other complicates everything. To make matters worse, it's a Race Against the Clock - back home, conflict is brewing among rival packs...

A direct-to-video sequel (the first of four planned), Alpha and Omega 2: A Howl-iday Adventure, was released Oct 8, 2013, and introduces Humphrey and Kate's pups: Stinky and Claudette, the alphas, and Runt, an omega. Despite the subtitle, the film barely involves holiday overtones and focuses more on everyone's attempts at rescuing Runt from King, a Social Darwinist wolf determined to take the territories for himself. The next, The Great Wolf Games, released March 25, 2014, concerned the pups' participation in the eponymous sporting event in a Ragtag Bunch of Misfits (particularly Claudette who connects with a rival team's leading pup Fleet). On October 7, 2014, Legend of the Saw Tooth Cave released on DVD. This time Runt decides to help a she-wolf named Daria who was chased out of her pack when she was young. As of 2017, seven sequels have been released.