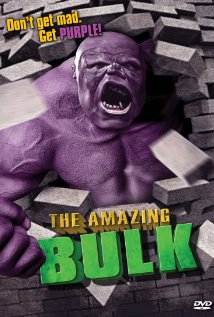 The Amazing Bulk is a mockbuster movie directed by Lewis Schoenbrun. It takes place in a bizarre green-screen world, where a scientist gets transformed into a bulky purple CGI humanoid. It must be seen to be disbelieved.

Also showed up on an episode of Red Letter Media's

Best of the Worst, and I Hate Everything here.

The Amazing Bulk provides examples of: