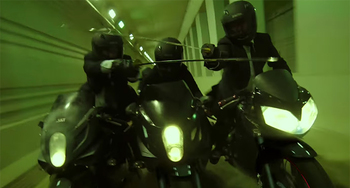 An X Meets Y cross between a Chase Scene and a Fight Scene. At least two combatants are battling in a normal way, but their fight takes them on a journey as well. This could be because one or both fighters is trying to get to a specific destination, or maybe because they're just trying to get away from the beatdown they might be taking.

When on the ground, this could feature copious amounts of Le Parkour and Roof Hopping, these fights tend to go anywhere and everywere. This is also highly improbable, as the fighters, if human, would likely be tired out of their minds to fight, run and give snappy quips at the same time. Of course, the fighters could be simply superhuman.

If this is seen as a video game mechanic in a Fighting Game, that is Free Floor Fighting. See also "Get Back Here!" Boss and (in reverse) Advancing Boss of Doom.

While this is often referred to as a Stern Chase in naval warfare, that trope actually refers to a much longer pursuit with actual fighting being relatively rare, such as a fugitive on the run from the law.