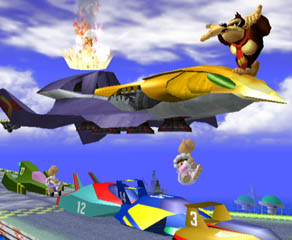 A Fighting Game trope, where the fight isn't always limited to the plane that it starts on. This can open a lot more variation for stage effects, transitions, and action that ends in a completely different place from where it starts. This makes the matches more dynamic than the static counterpart, Fixed-Floor Fighting.

Because of the somewhat more random nature of the fights, battle tactics can be changed. Some combos may be cut short due to the environment not allowing them, a Ring Out or environmental damage may be more possible, etc. In this genre, a Launcher Move may simply knock an opponent through a predictable path, or open a new path through the game's environment.