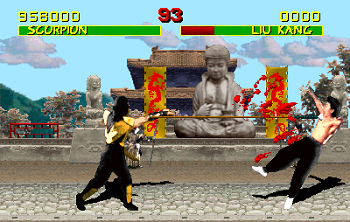 GET OVER HERE! ...as opposed to anywhere else?
Advertisement:

A Fighting Game trope where the action all takes place on one stable plane. Fights here tend to be more technical, as the simplified stages offer less chance for unpredictability. The limited range of action means combos may likely be continued longer than in a Free Floor Fighting game, as there is less variation for where an opponent, or the stage, may go.

This type of level design may be somewhat tied to the Polygon Ceiling in Long-Runners. This type of fight may promote the Perfect-Play A.I.. May be the result of the Invisible Wall or Insurmountable Waist-High Fence.