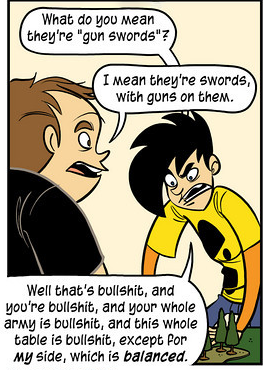 Not to be confused with the TV series Scrubs. Also, beware that this term has a couple of other definitions besides the one presented below, such as the one provided by TLC.
"You all see this brand new razor?
I had it sharpened just today.
Now, I'm coming in there with my rules
That you must follow when you play."
— Phil Harris, "Dark Town Poker Club"

A Player Archetype in competitive video games. A Scrub adamantly believes that their "house rules" should apply to everyone to promote their view of "fair play." If a scrub sees a move or strategy they don't like (or can't beat), they ban it (if only in their own mind), and complain that anyone who uses it is cheap.

However, the video game is what it is; it defines what you can do and what you can't do. In competitive games, the rules exist as written into the game world. Sometimes this leads to an over-powered character, and sometimes it leads to a Game-Breaker. Some competitive video game players accept that some characters/races/etc. are more powerful than others, and they'll play one of the characters/races that are on the top tier and ignore the rest. If something does get banned, it is only after a great deal of research, discussion, and deliberation has led the community to the conclusion that the character/faction/item/etc. is detrimental to the overall health of the game and nothing short of banning it completely will solve the problems it creates.

Some people do not hold to this. They develop house rules designed to bring what they feel is a game imbalance back into balance, so that there is more variety (after all, if a game has 20 characters, but two of them are so strong that they're practically unbeatable unless you use one of them yourself, then the game effectively only has two characters because the other 18 aren't worth playing). Essentially, a self-made game patch. This is all well and good. A classic gaming example of this was the "No Oddjob" rule from GoldenEye, often put in place because Oddjob was a Game-Breaker due to him being too short for anyone else to shoot without taking the time to manually aim their gun downward. note In fact, GoldenEye’s gameplay and engine programmer Mark Edmonds declared (not entirely seriously) that using Oddjob was 'definitely' cheating

, but was happy to let players come up with their own house rules.

However, this self-limiting with house rules can go too far. When it does, you have the Scrub.

The mistake the Scrub often makes is making up rules too soon, as the Metagame can often turn an apparent imbalance on its head. A lower tier character can become a higher tier one, or vice versa. Or something that seemed initially very unbalanced can be countered with time and effort at learning the tactic. Alternately, with the advent of patching, more modern titles may rebalance the game so that the former Game Breakers aren't as unbeatable as they used to be. The Scrub circumvents this by simply banning something without making a good faith effort to actually get around it with the in-game rules.

The Scrub will often consider the tactics that he bans "Game Breakers". However, what constitutes a Game Breaker varies from person to person. Within a particular skill level, a game can be broken in that a simple repetitive tactic can lead to success. A more skilled player could stop it, but if it requires a great deal more skill to stop the tactic than to perform it, then it can easily appear to be a Game-Breaker. Not that it matters; even if the "offending" player changes to a different strategy and wins again, the new strategy is also "broken".

What ultimately makes the Scrub undesirable isn't the rulesetting; it is the attitude. Players will often agree to refrain from using certain moves or from selecting certain characters so they can have fun without investing a lot of time into learning the game. The Scrub, on the other hand, believes that his way is the only proper way to play the game and refuses to acknowledge that the game could be more fun any other way.

Scrubs may also put down others who use certain characters/teams/etc. for simply using them like everyone else is using in order to win. In other words, they don't like it when people use something that everyone else is, since it's not "original", and will even go as far as accusing these people at sucking at the game for not using anyone or anything besides the top tiers. In Collectible Card Games, this is often referred to as "net decking" because they believe the player took their deck idea from a successful deck they found on the internet.

Compare and contrast with "Stop Having Fun" Guys, who are at least as annoying as the Scrub. The Scrub is the antithesis of the "Stop Having Fun" Guy, although one could argue that the two archetypes are very similar — "Stop Having Fun" Guys demand that everyone use the most efficient and powerful choices (with failure to do so considered "inferiority"), while Scrubs insist that everyone follow their personal house rules (with failure to do so considered "cheating"). Both make the mistake of taking things very seriously, both are more than willing to start a Flame War rather than let another kind of player exist in peace, and both are eager to argue with anyone who doesn't agree with their style of play.

Scrubs are often the result of Min-Maxing / Whoring. When a player sacrifices certain skills they deem useless in order to bolster skills they deem superior, they usually aren't happy when another player has a build meant to exploit their weaknesses. These scrubs will often argue that whatever mechanic they are choosing to ignore isn't part of "the real game," and that it should be removed.

Combined with the Noob, a scrub can quickly turn into a God Modder, who actually does cheat or abuses glitches to the extreme, but still considers his tactics to be fair. And then there's the "tryhard", a low-level player with a scrub-like mentality who fancies themselves a high-level player, and tries to adopt high-level tactics even though they have no idea how to actually pull them off. Also note that because all of these labels are "bad", most people do not consider themselves to be any of them—someone who fits the description of "Scrub" will just think they're normal while accusing any opposition of being "tryhards" and "SHFG"s, or any such combination thereof.

On the other hand, the term "scrub" can be used by players to indiscriminately insult players they deem unworthy, or simply players they don't like. The word "scrub" gets thrown around so much in the World of Warcraft community that it has lost its original meaning. (Although in reality, the meaning of "scrub" to simply mean "incompetent" came first, and using the term Scrub as a trope to define the mentality as David Sirlin did came later.)

contain some of the most thorough investigations of the "scrub" phenomenon you can find anywhere. See also Tall Poppy Syndrome.

The source of the page quote for "Scrub", Phil Harris tells the story of a man named Bill who suspects he's been cheated at the poker table one too many times, so he takes over the game and, backing his words by threatening violence, makes some demands that range from reasonable to paranoid. He doesn't care if the table's technically following the rules of Poker; Bill IS the rules now.

The source of the page quote for "Scrub", Phil Harris tells the story of a man named Bill who suspects he's been cheated at the poker table one too many times, so he takes over the game and, backing his words by threatening violence, makes some demands that range from reasonable to paranoid. He doesn't care if the table's technically following the rules of Poker; Bill IS the rules now.