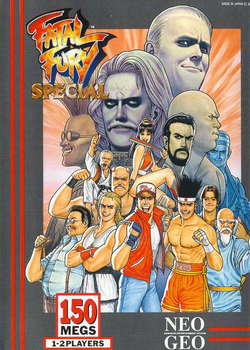 A new legend is about to begin.
Certainly, they existed...
Those blinded by ambition.
Those consumed with vengeance.
But here, they do not exist.
Only winners and losers here.
For here, THE MIGHTY RULE!
Advertisement:

Fatal Fury, known in Japan as Garou Densetsu (Legend of the Hungry Wolves), is a Fighting Game series by SNK that was released for the Neo Geo arcade and home video game systems.

The story of the series is set in the fictional city of Southtown, USA, and starts many years before the events of the first game, when martial artist Jeff Bogard adopts two orphans, whom he names Terry and Andy. Later, crime lord Geese Howard killed Jeff Bogard, an event that young Terry witnesses. Swearing revenge, both brothers start to train, to fight Geese in his "King of Fighters" tournament. Andy leaves to train in Japan and Terry stays in Southtown. Ten years later, in 1991, the brothers and Andy's friend Joe Higashi enter the King of Fighters to avenge their father.

The first game only has three playable characters, and an interesting mechanic in which a second player joining in the middle of a fight will join the first player in double-teaming their present opponent before facing each other. The sequel drops this mechanic and adopts the World Tournament format used in Street Fighter II, introducing five new playable characters, and new bosses. More characters and villains are introduced in subsequent sequels, and the original Big Bad Geese Howard also returns in most of them.

The distinctive characteristic of the series is the ability of the characters to fight in two different planes in most stages, giving them the capability to avoid attacks by moving between planes. This system would undergo some changes after the third installment and was dropped altogether for the last game.Games in the series:

While the last installment of the series appeared in late 1999, many of its characters are still widely popular today and continue to appear in a number of Spin-Off series and other main series, most notably The King of Fighters series. More recently, pachi-slot machines with the Fatal Fury theme have been released and there is a crossover game with Fighter's History Dynamite available for mobile phones in Japan. Mai Shiranui appears in Dead or Alive 5: Last Roundnote Astonishingly appropriate, we know! and its sequel, Dead or Alive 6, while Geese Howard appears as a DLC Fighter in Tekken 7. Terry Bogard himself appeared in Fighting EX Layer in 2018, and in 2019, was announced as the fifth DLC character in Super Smash Bros. Ultimate.

Art of Fighting, a fighting game trilogy from SNK, is a prequel that takes place a decade prior to the events of Fatal Fury.

An anime adaptation comprised of two TV specials (often mislabeled as OVAs, even though they aired on Japanese TV before getting home video releases) and a feature-length theatrical movie were based on the games, all including character designs by Masami Obari. The TV specials were based on the plots of the first two games, while the feature film had an original plot and villains. While both the specials and the film were released in the States in the late '90s by Viz Video (and re-released on DVD years later), those releases fell out of print years ago — so Discotek Media snagged the licenses for all

and re-released them on DVD on August 26, 2014. Of note, their release of The Motion Picture featured anamorphic presentation for the first time.

The anime specials and movie provide examples of:

Real Bout Fatal Fury 2 The Newcomers (1998) & Thorgi's Arcade [Fatal Fury Retrospective]: In Thorgi's look through the Fatal Fury series, he gets to Real Bount 2 and comments about the over the top nature of the Versus screen.

Example of:
Versus Character Splash

Real Bout Fatal Fury 2 The Newcomers (1998) & Thorgi's Arcade [Fatal Fury Retrospective]: In Thorgi's look through the Fatal Fury series, he gets to Real Bount 2 and comments about the over the top nature of the Versus screen.