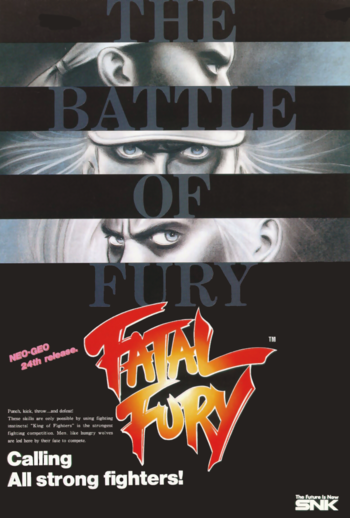 Live or die! Expert fighters are waiting to fight you!
Advertisement:

The first installment of the Fatal Fury series. It was released worldwide for arcades on November 25th, 1991.

The story is set in the fictional city of Southtown, USA, and starts many years where the protagonist, Terry Bogard, his brother, Andy, and their good friend, Joe Higashi, team up to fight Geese Howard in his "King of Fighters" tournament. The Bogard brothers are out to defeat Geese for the death of their father years before the present.

The game has three playable characters, and an interesting mechanic in which a second player joining in the middle of a fight will join the first player in double-teaming their present opponent before facing each other.

The roster includes the following: